Boots the Deerhound 2
I have been working a lot on some small pencil drawings of animals, but I got some work done on Boots too. I am enjoying working with pastel and pastel pencils.
I mentioned in last week’s blog that when I used to paint exclusively in pastel about 20 years ago, pastel pencils weren’t good enough for my technique. But there have been such great innovations in art since then, that I took a chance and bought a full set of Derwent’s pastel pencils and I was very pleased with them. I think that one of the reasons that they are working well on this painting is because of the primer. It is gritty enough to catch the pigment.
One of the best things about pastel back in the days when I was bringing up my 2 sons, was how you can just walk away and leave it while you deal with the next domestic emergency! Now I am living with dogs and cats I still have domestic emergencies. Moreover, it is so nice just to be able to pick up a pastel or pencil and make marks on the canvas without having to set out my palette and brushes.
I have been working on the left hand side so I don’t know if the changes in the painting are noticeable. I am happier about the grass and the fluffiness of Boots’ fur against it. I have been blending the darker areas too. It will look more interesting when I have worked on his head. I am getting there.
I am going to spray it with fixative so I can go over the details with oil paint. So in the end I suppose that I should call it mixed media. 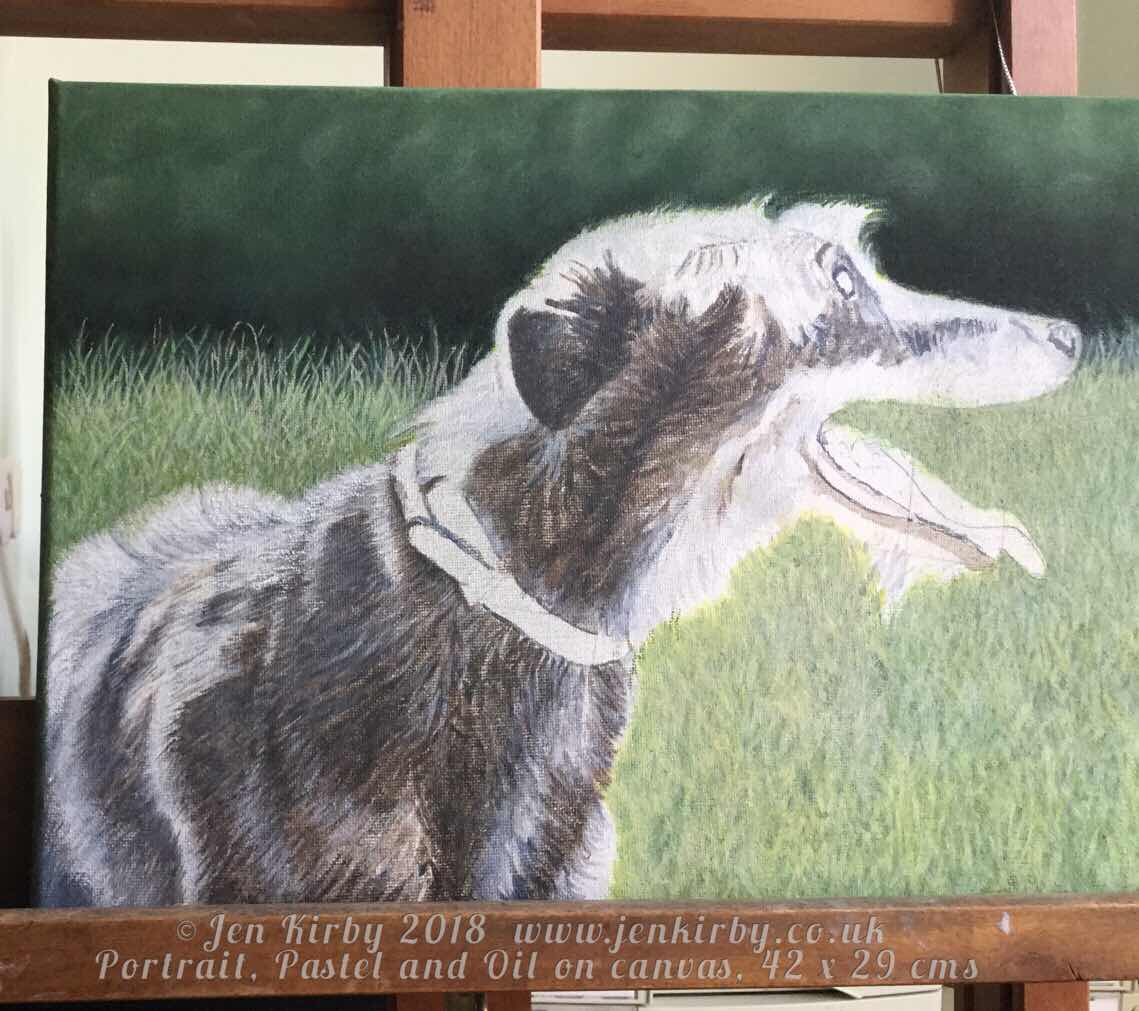 Boots the Deerhound
I used to paint exclusively in pastel until I lost the use of my right hand thumb, which meant that I couldn’t grip a stick of pastel without it dropping on the floor and crumbling. So I changed to working in pencil. I used a grip that meant the weight of the pencil rested on the fork between my thumb and first finger. Then, as my thumb started to get better, I painted in acrylic gouache using a method similar to the egg tempera technique. I lay the colours on the surface without directly mixing or blending them.
Then I tried oil paint. My hand isn’t strong enough to manipulate the paint except in glazes, so I was feeling frustrated. I started to wonder if there was any way of painting pastel over oils. Perhaps I could hold a pastel pencil. When I gave up pastels, the quality of pastel pencils weren’t up to my technique.
So I started to look around at ways of combining pastel with oils.
I discovered that there is a binder to turn pigment into oils. I bought a bottle of it but I haven’t tried it yet.
Then I found a fixative that claims to fix pastel and other dry mediums so that they can be overpainted in oils. I bought some and tested it. I painted over the blue sky in an unfinished oil painting with Colourfix primer. I have used this primer to use coloured pencils over acrylic and that is a challenge so I knew that I would be able to paint the pastel on top of it. I made a nice blended blue sky and sprayed it with the new fixative. It worked. But I haven’t tried painting over that (yet).
I have been struggling with the painting of Boots. I wasn’t happy with the hedge behind him or with the grass against the shadows of the hedge. So I tried using pastel.
I was thrilled to find that I could use the pastel sticks without dropping them. I was working on the hedge for nearly 2 hours without getting my arm and hand tired. I stopped because it was time to spray it with the fixative.
What I learned: to spray it lying down and it takes more than a couple of minutes to dry. I set it upright when I first sprayed it and I got a dark green run over the light green grass. I laid it flat and it was easy to wipe clean, but I won’t do that again. It was a good thing that it was only the hedge.
I brought it downstairs and set it up on the easel and worked on it some more today. I concentrated on improving the grass with pastel. I also worked a bit on Boots’ fur where it curls over the grass. The white is brighter than it was but it still needs work. I added a bit of grey but not enough.
I am adding 2 photos of materials. First I want to show my “palette”. My brother made it for me by routing grooves in a piece of nice wood.
Second I use quantities of putty rubber or kneadable erasers; two names for the same thing. I bought 3 different makes because the manufacturers change their formulas sometimes and it is a long time since I bought them. I cut them into small pieces with a pair of scissors. I find that they keep better with a tidy edge, rather than pulling a piece off. The important thing to know about storing putty rubbers is to keep them in the dark. Light makes them turn hard.
I don’t use them for erasing much. I use them as a blending stump. The kind of stump that I have bought in the past transferred dirt once I had used it once. But a small piece of putty rubber can be squeezed to a new point for days. You can get a really clean edge with it.
The fixative is SpectraFix Degas Fixative. 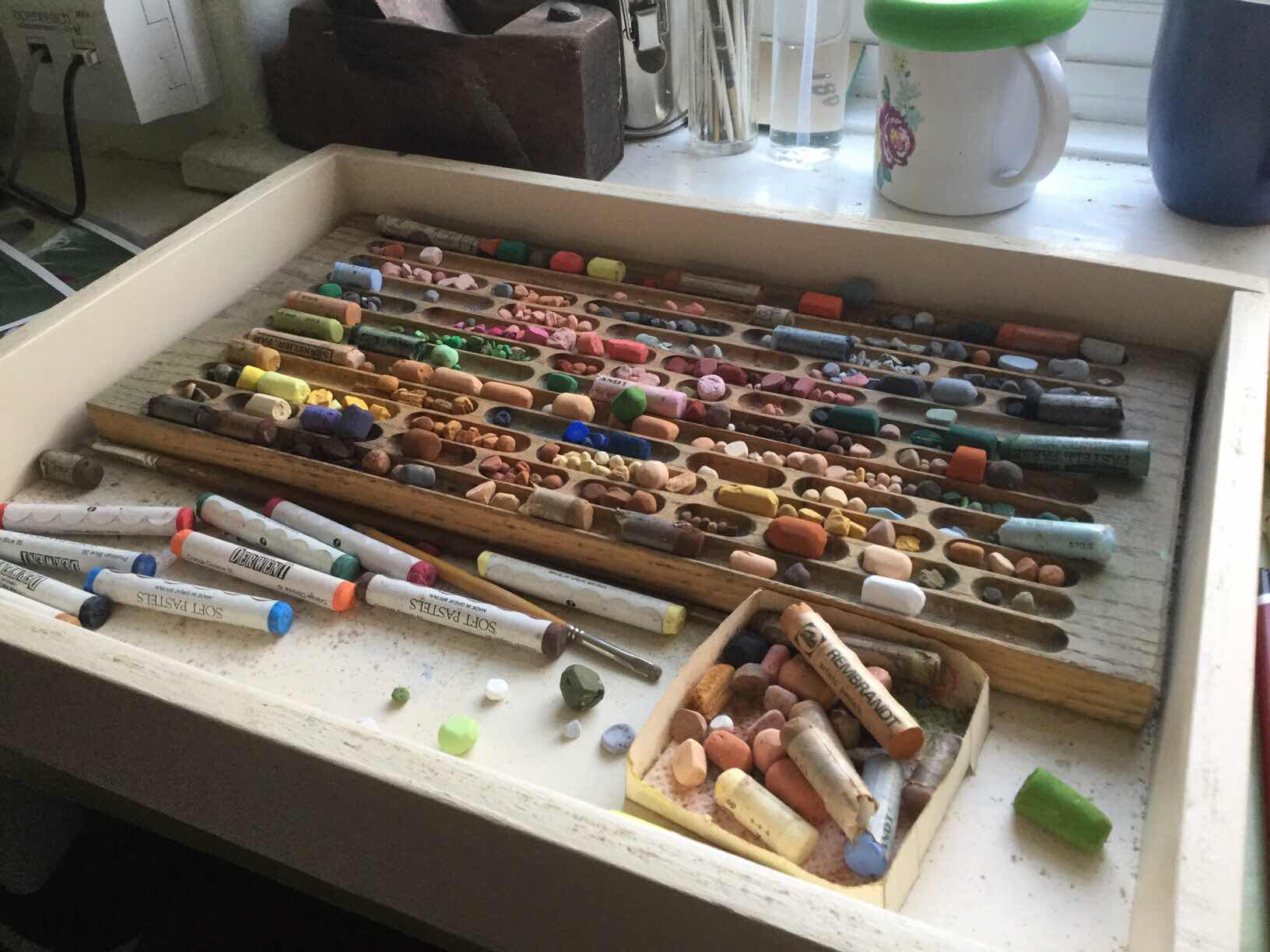 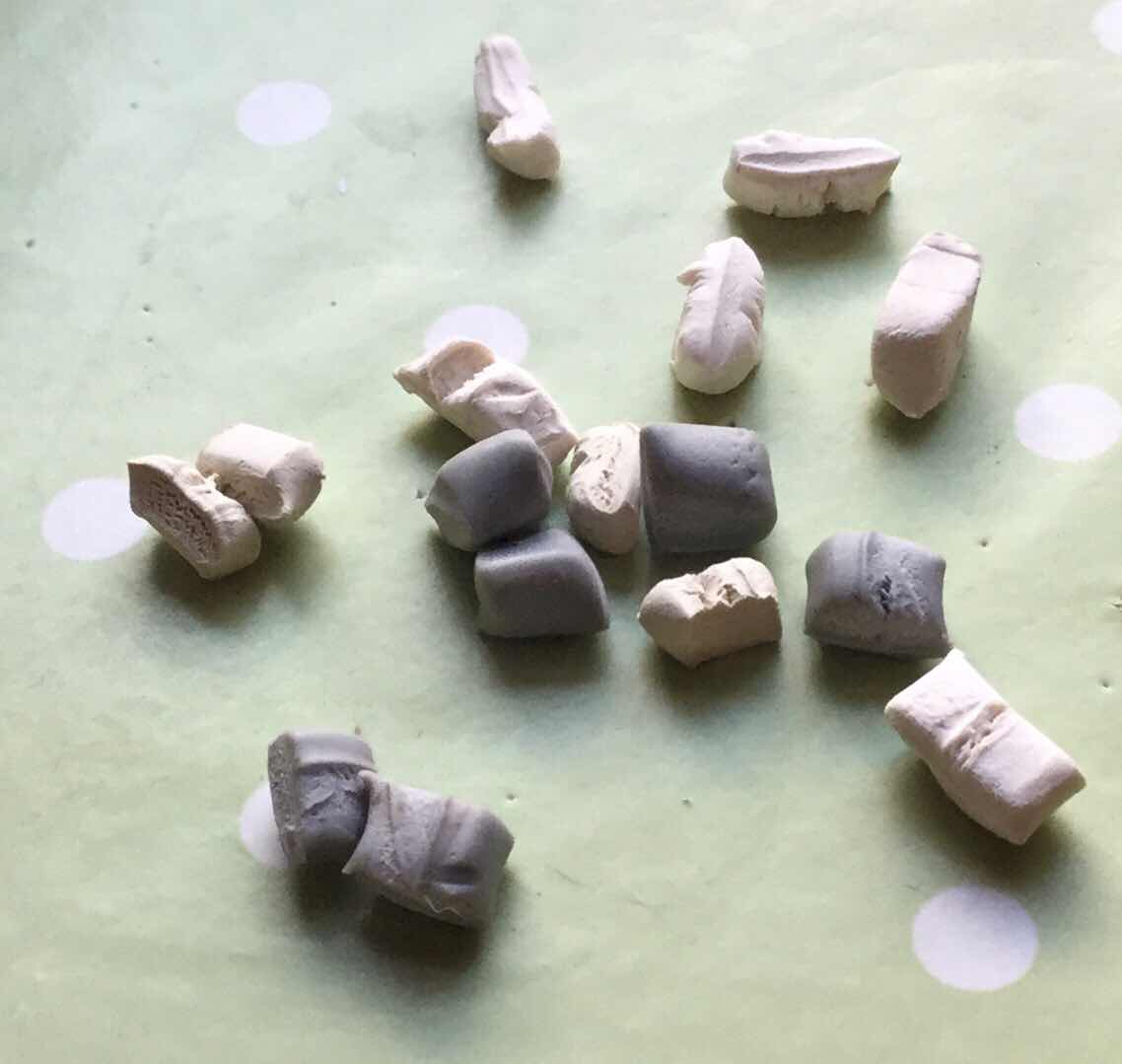 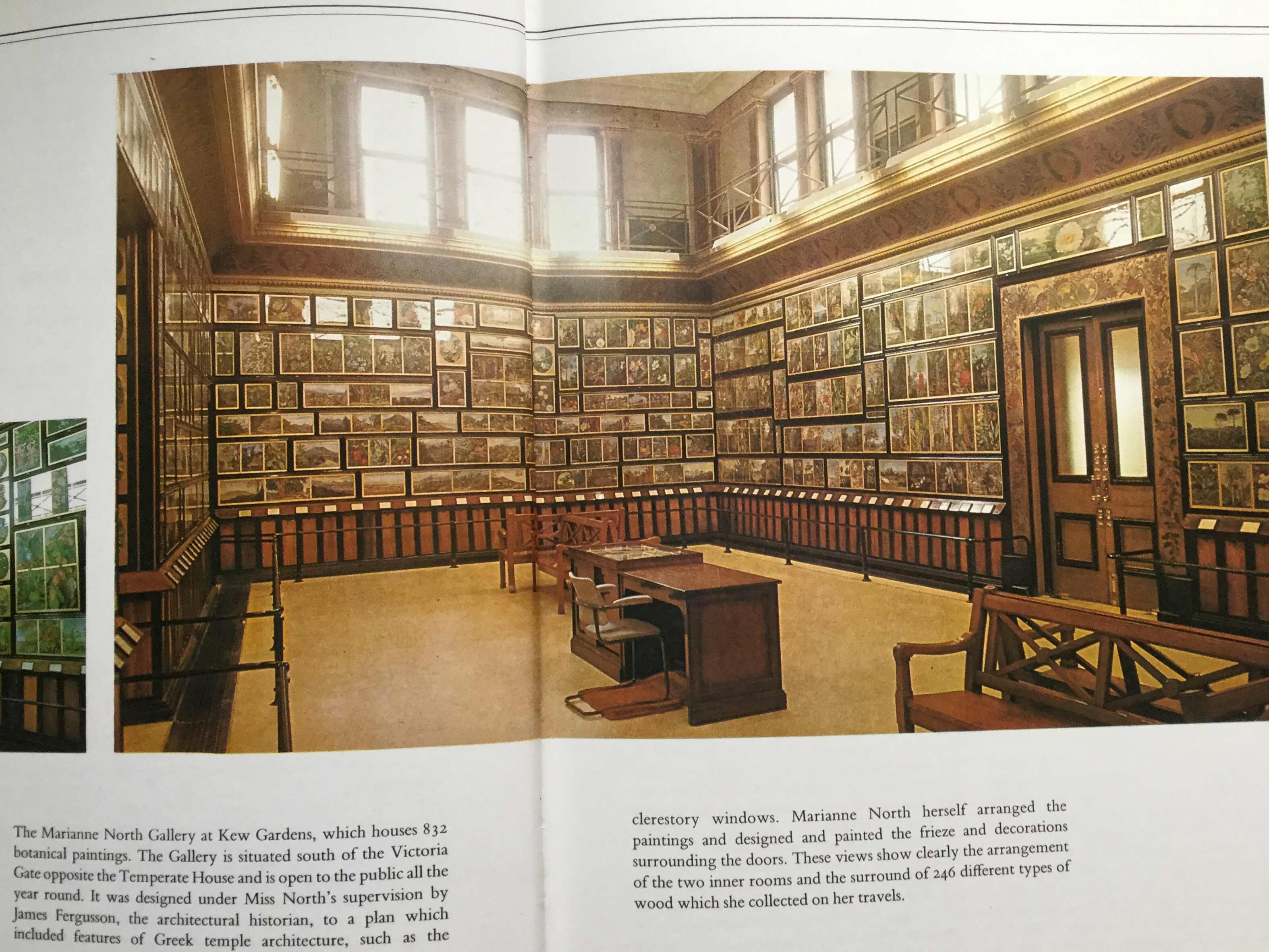 Marianne North
I have been experimenting with mixed media this week and it isn’t ready to be seen yet, so I decided to write about another of the books in my art library. It is right next to “From Hogarth to Keene” on the shelf and I thought I must share it one day, but I didn’t expect it to be this week.
I hadn’t heard of Marianne North before I found the book “A Vision of Eden” in a second hand bookshop. It is part autobiography and part biography. She described how she learned to paint flowers.
After her mother died they moved to London and often visited Kew Gardens which made her want to visit the tropics. She traveled Europe with her father and later many other parts of the world, and wherever she went she painted the flowers.
Eventually she had so many paintings that Sir Joseph Hooker offered to house her paintings at Kew, and she had a gallery specially built. Sir Joseph Hooker gave her introductions to botanists all over the world and they helped her access the plants she wanted to paint. She discovered many new species and brought them back to Kew.
Having learned about the Marianne North Gallery, I couldn’t rest until I had visited it. I was living in London and had visited Kew Gardens many times (I loved the Palm House) but I hadn’t noticed the gallery. So I went and looked for it.
The photo of the gallery in the book didn’t prepare me for the vision that met me when I entered the gallery. The paintings glow like jewels.
I don’t know if you can read the text under the photo. It says that there are 832 paintings in the two rooms.
Below are some more photos of pages from the book. One is a photo of the other room and there are photos of a few of the paintings to give you an idea of the impact.
Do visit the Marianne North Gallery in Kew Gardens if you have the opportunity. 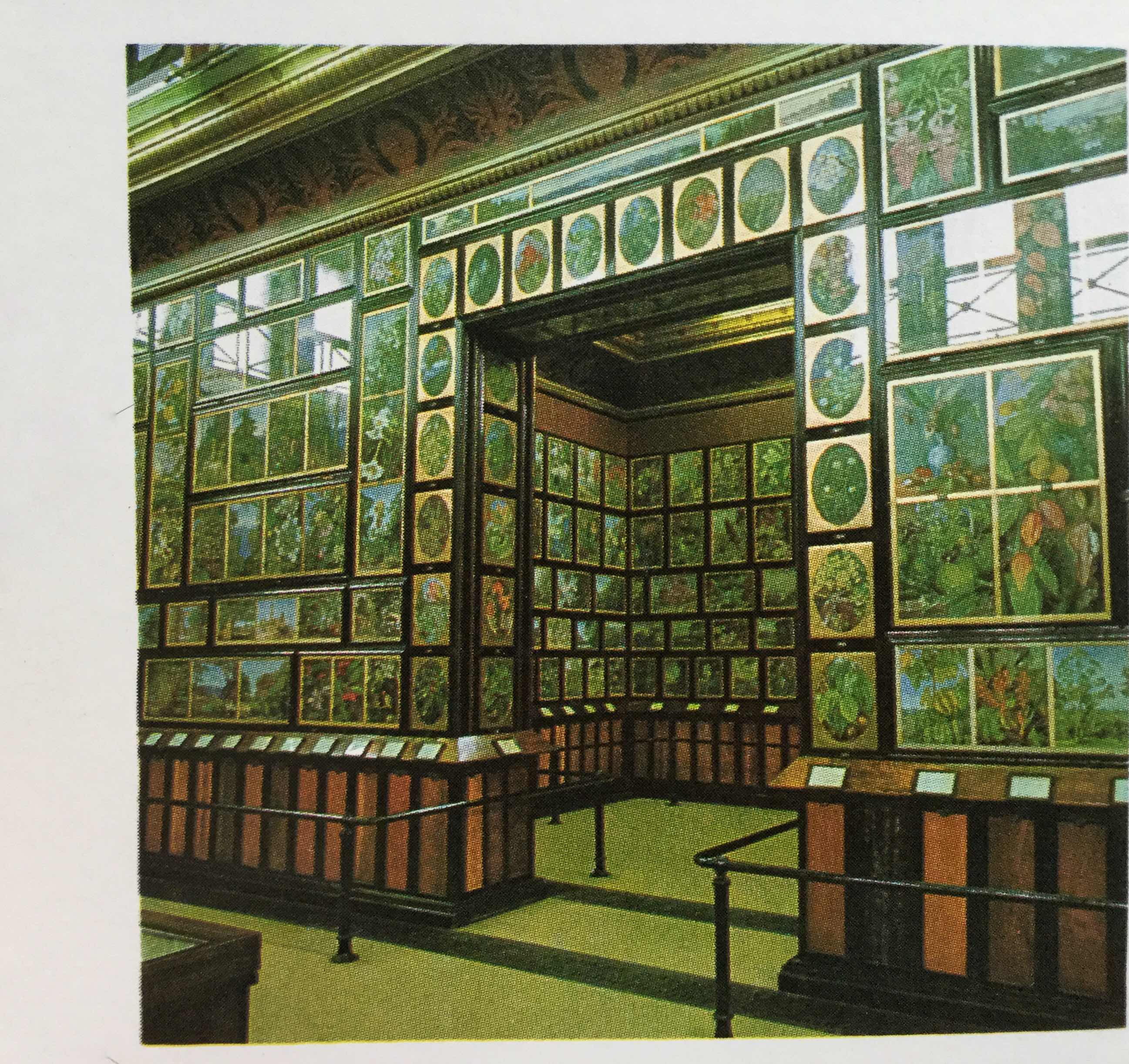 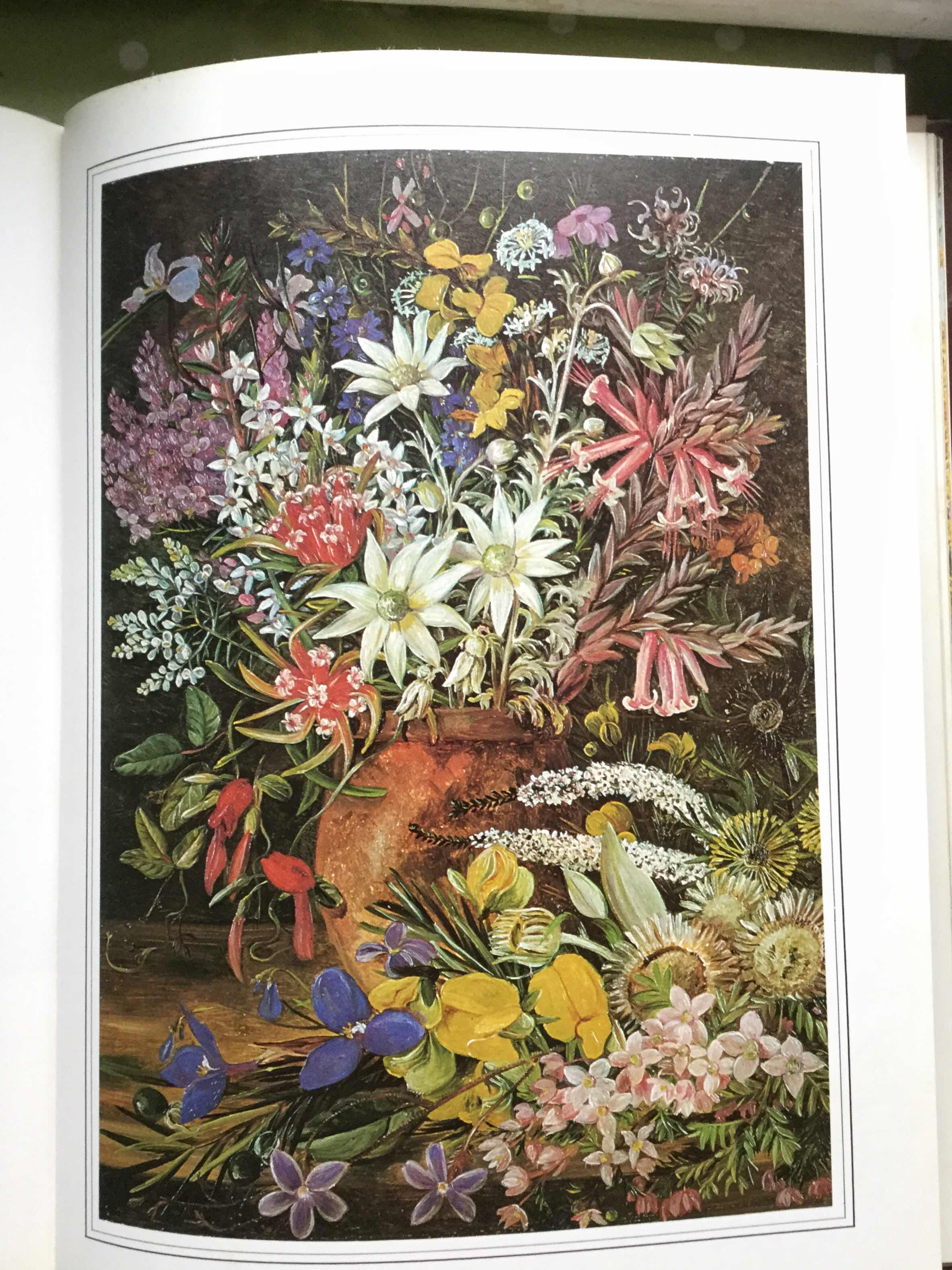 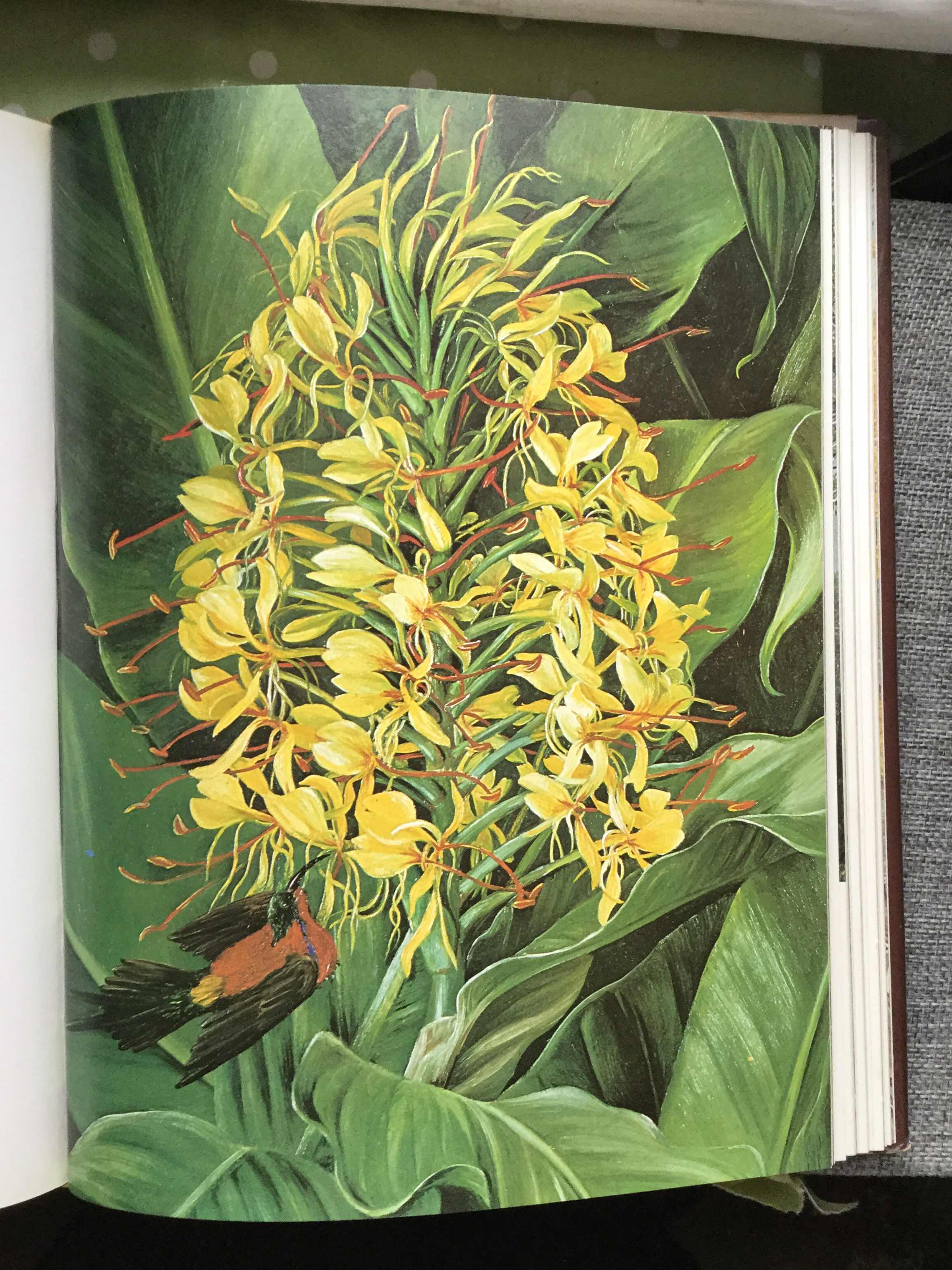 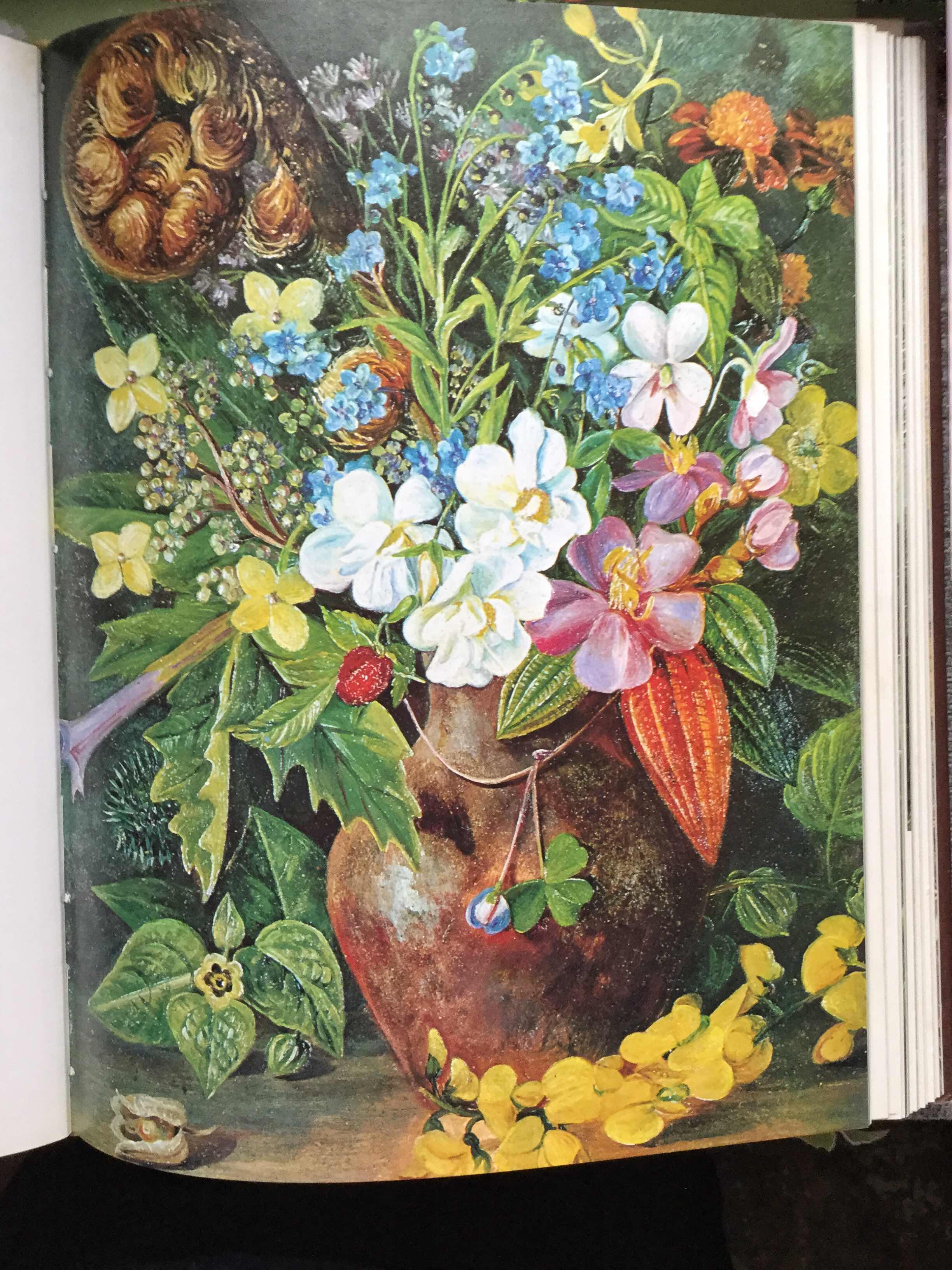 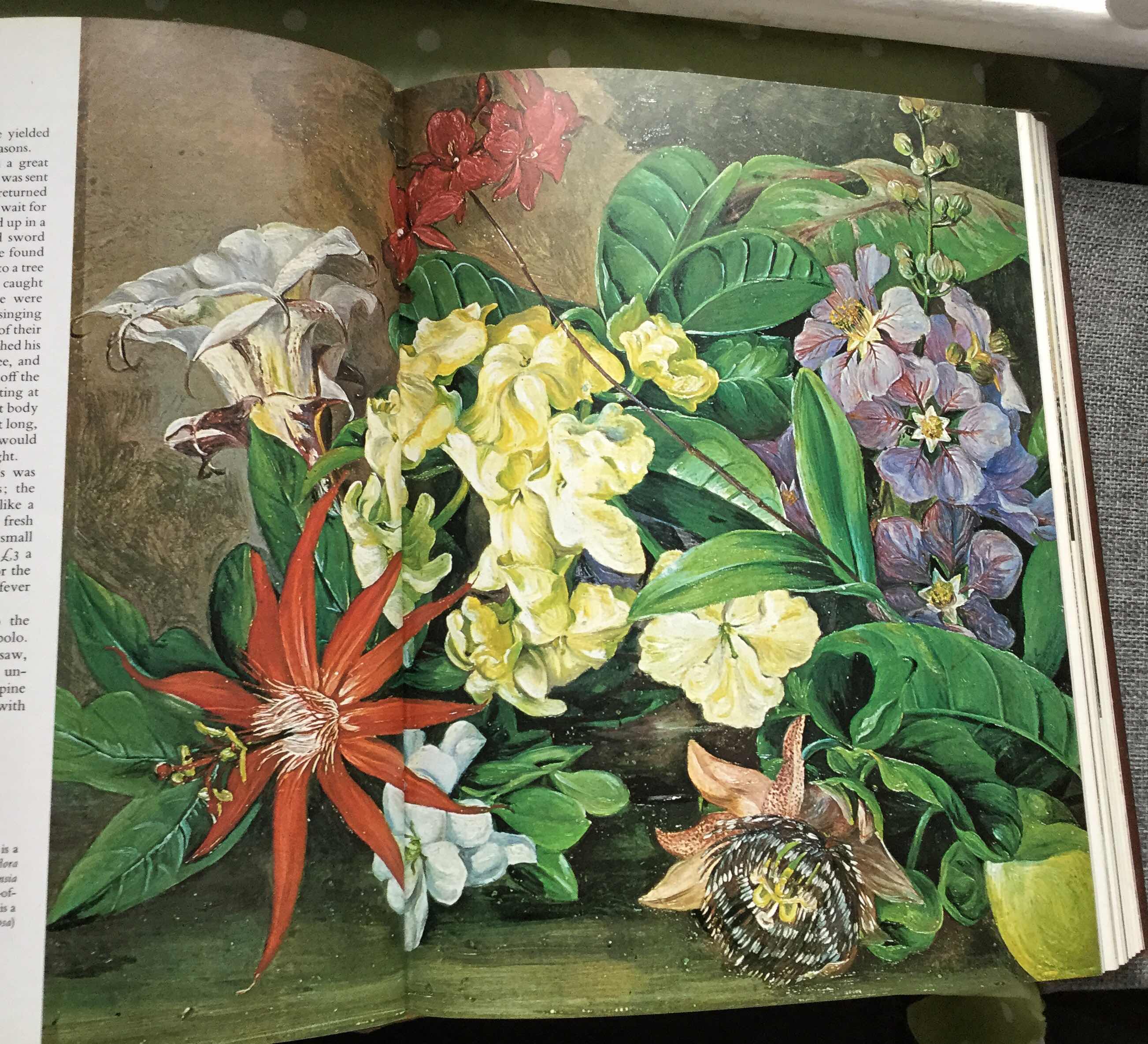