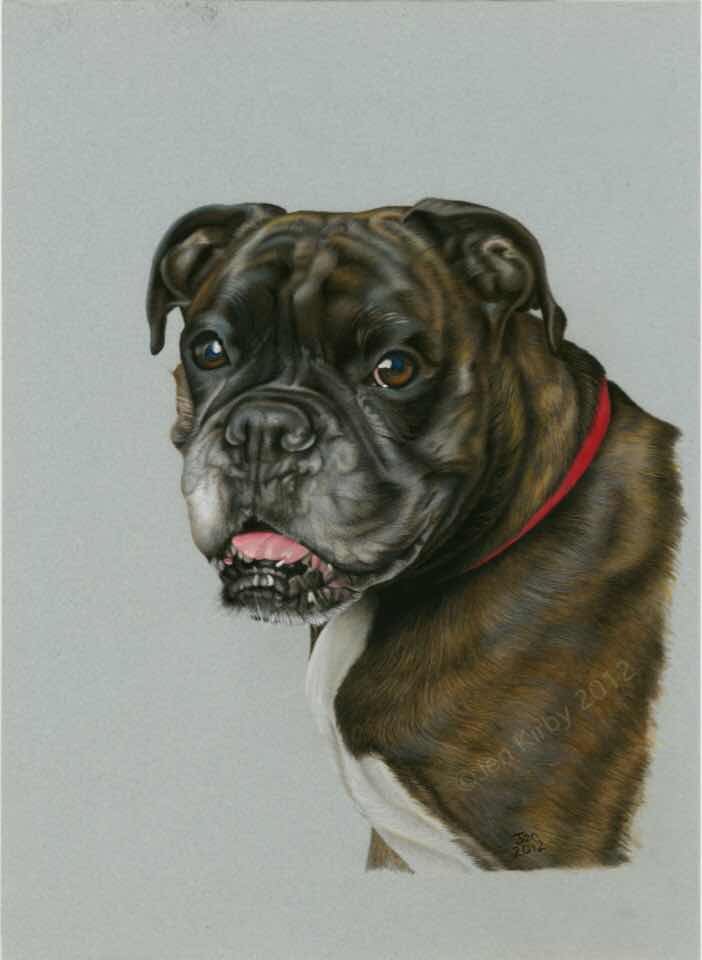 Viewing Art
I watched Civilisations on BBC 2 last night. This episode was relevant to me and my portraits as it was about what the viewer brings to the depiction of the human face. Mary Beard had some pertinent comments to make about how taste in art is influenced by culture.
http://www.bbc.co.uk/programmes/articles/GThNCvQtxsgJfJrxCxFJb2/civilisations-masterworks-of-beauty-and-ingenuity
When I paint or draw a portrait I am very conscious of the relationship of my client to the subject, and, if my client wants a portrait of themself, I try to be aware of how they want to be viewed by their friends.
It took me a while to decide which portrait to choose to illustrate this, and finally, I decided that the portrait of Tyla would be a good example.
I had met Tyla and knew that she was a dog of great character. She had a lot to say in rather growly tones when she greeted me and she was so much loved. As it was a surprise birthday present, she was brought to my house so I could take reference photos. I wanted her to face the window for the good light, but there was a door behind her and my two dogs were snuffling under that door. Fortunately I had some bits of chicken, so I was able to attract her attention, but not fully, as even when she had her nose pointed in my (ie the chicken’s) direction, her gaze was still over her shoulder to check on the snuffles.
I wanted to capture the look of a dog gazing adoringly at her guardian. I know that look well as I have dogs myself. So I was able to get the look I wanted.
As Tyla has a wonderful brindled coat it took me much longer to paint than I hoped and I missed the deadline of the birthday. So I scanned the unfinished portrait and made a birthday card of it. It was seriously unfinished but it was still recognised. I was told about it. He exclaimed "That’s my dog!" So I am sure I succeeded.
As I mostly paint or draw family portraits, I aim for an affectionate expression. It isn’t too difficult if they are with their family like children accompanied by their mother. But I remember one occasion when I was struggling to get usable photos of two young sisters until I was inspired to give them the camera and ask them to photograph each other.
I have been commissioned to do mostly children or pets of recent years. But I have always enjoyed painting adult portraits too.