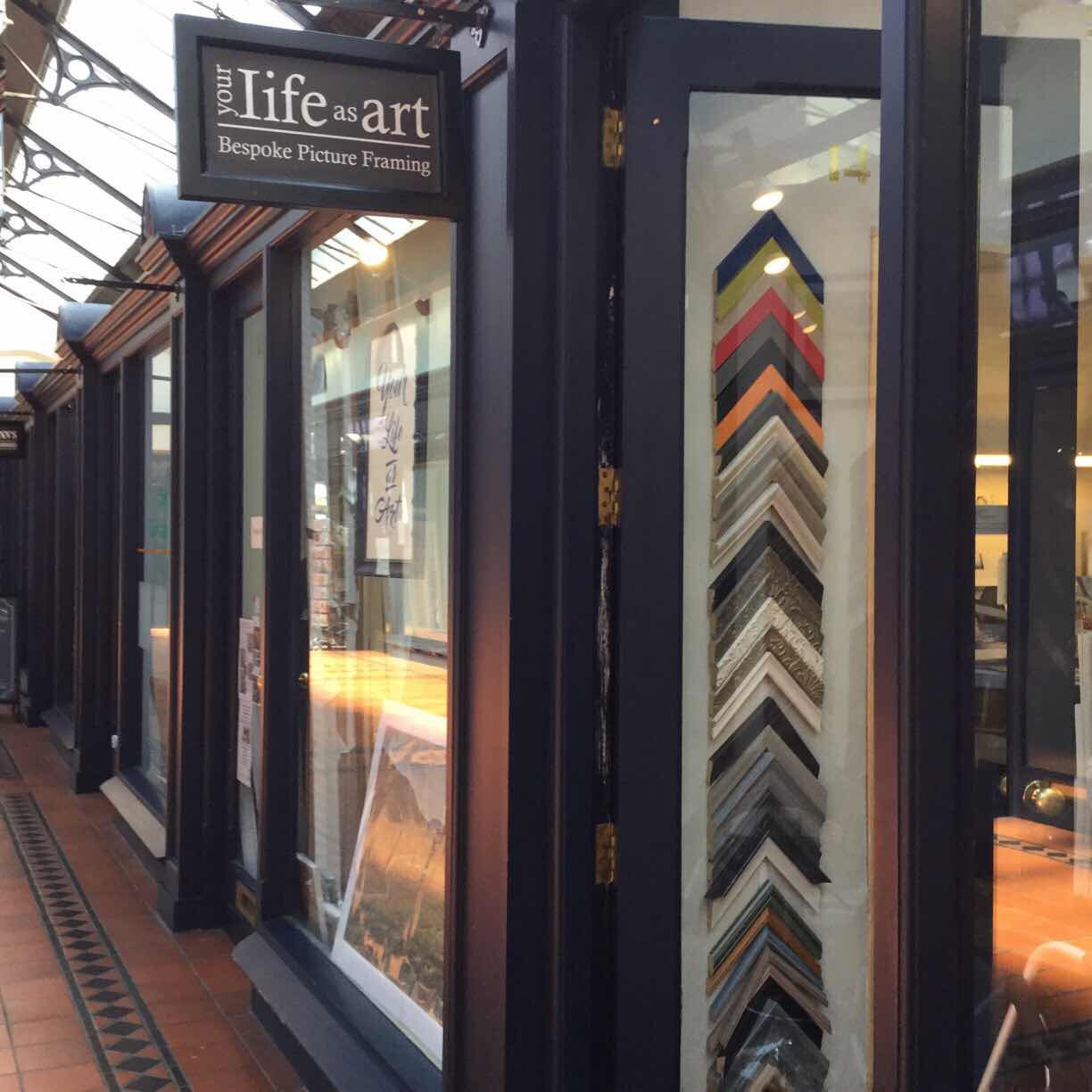 Visiting the Framers
I don’t often buy artwork. My house is so small that I need all the wall space to hang my own art safely out of the way. But I found an artwork that I just had to have. And this week I took it to the framers.
If you live anywhere near Penrith, Cumbria, UK, I recommend “Your Life as Art” if you have any pictures  that need framing.
Not only is Adrian a very good framer, but he has an art degree and has worked in the arts all his life, so he is the ideal person to help choose which frame and mount board will set off the artwork to advantage.
So if you have any framing to do, go and see Adrian Brunskill at Your Life as Art, 13/14 Devonshire Arcade, Penrith, CA11 7SX, telephone 07712569787 and see his Facebook Page
https://www.facebook.com/yourlifeasartpenrith/
The artwork I took to be framed, is a collage by Shawn Marie Hardy. I love all her collages, but this one, “Hoovering”, had to be Mine! Not only does it have that surrealist quirkiness, but the balance and composition is brilliant. And it reminds me that when I have housework to do (especially vacuuming the dog hair off the carpet) at least I don’t have to clean the Milky Way!
Go and view her work and see if you find it as delightful as I do.
http://shawnmariehardy.com/home.html
http://shawnmariehardy.com/artwork/4178172-Hoovering.html 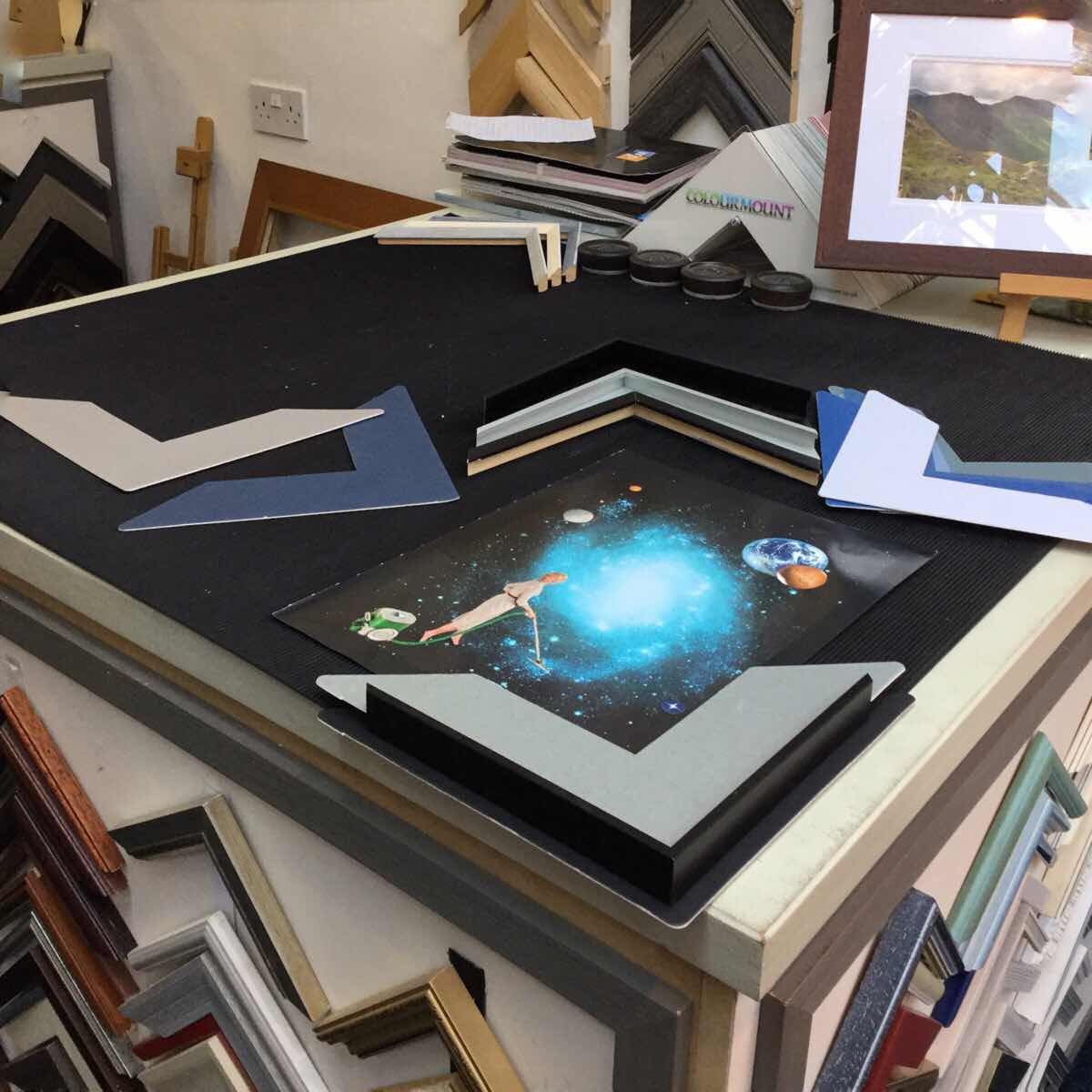 Adrian and I looked at lots of combinations of frames and mount boards. Finally we decided on a silver mount to reference NASA, and a slim black aluminium frame. It wouldn’t have looked right in a wide frame. That would have swamped the artwork.
I am looking forward to seeing it framed.

Email ThisBlogThis!Share to TwitterShare to FacebookShare to Pinterest
Labels: “your life as art”, artwork, frame, framing, mount board 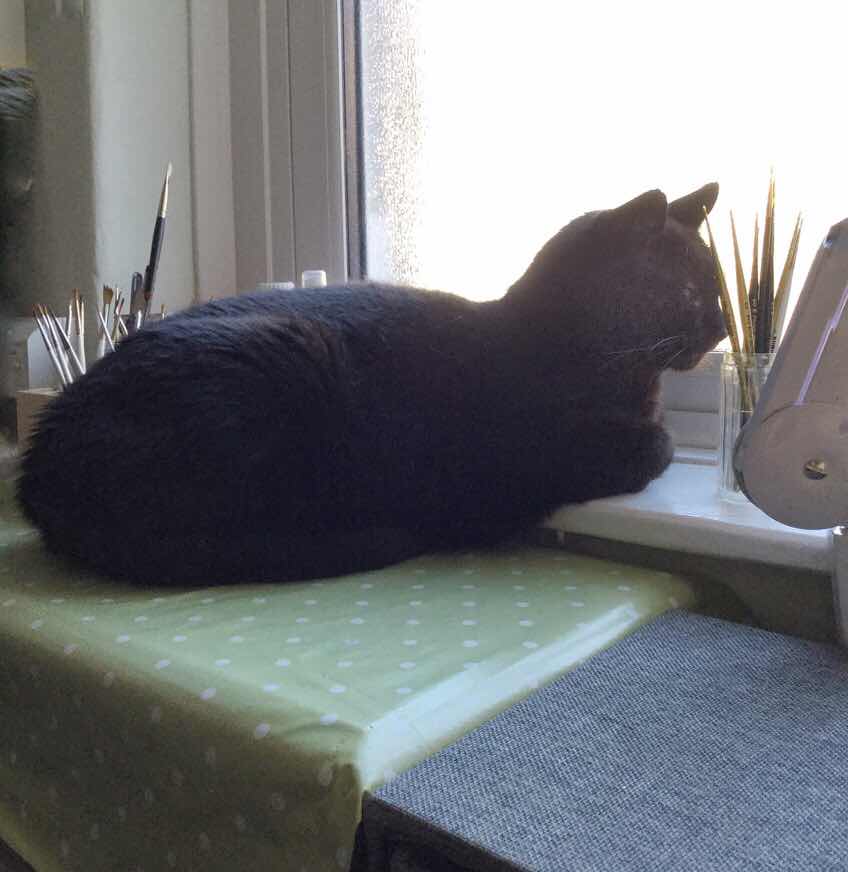 Why I Embrace Cultural Diversity

Why I Embrace Cultural Diversity
"The differences between people need not act as barriers that wound, harm and drive us apart. Rather, these very differences among cultures and civilizations should be valued as manifestations of the richness of our shared creativity" quote by Daisaku Ikeda.
I had some interesting discussions with the visitors to the "Gypsy Portraits, Changing Expectations" exhibition during the Appleby Horse Fair. Many of the visitors were aware of the caring aspect of Gypsy culture and believed that it was because of their close family ties. I told them that it didn’t just apply to family members and I told them what had happened when I was walking down to the church on Saturday morning.
The short cut down the hill to Appleby town centre is a steep footpath (named LadyGarth) with a number of sloping steps near the top. I am so disabled that I have to use a walking frame with wheels at the front and sliders at the back, so I approach each step very cautiously.
A lot of people were coming down the hill from the railway station and I was letting them pass me.
Half way down the footpath is a seat and there was a family group of Gypsies sitting there. The man jumped up and ran to help me, though he had one shoe on. He had the other shoe in his hand. He helped me very efficiently. When we reached the seat I explained to him and his family about the exhibition and its purpose.
Respect for older people is not confined to Gypsies of course. It is silly to think of a person’s culture as being anything to do with their genetics. I have lived in seven different counties in England and each area has its own attitudes to many aspects of life. As a child, I was aware of the difference in attitudes to certain aspects of life in areas just a few miles apart.
A person who influenced me powerfully was a girl who I met at Southampton University in 1969. Her family were Hindu, lived in Iraq and went to a Christian school. She had a broad understanding of the similarities underlying different cultures. She taught me a lot and I became fascinated, and wanted to learn more.
I lived in North London for 15 years and made friends with people who came from many different nationalities and cultures. It was a wonderful opportunity to learn from them.
As religion is a major source of cultural attitudes, I was particularly fascinated to learn how different faiths affected people’s way of life. When it came to Buddhism, I knew about priests and monks spending much of their time in meditation to attain enlightenment but I wondered what was in it for ordinary people. That seeking spirit caused me to ask Japanese ladies whom I met in North London about their experience of Buddhism and I was lucky to learn about Nichiren Buddhism and the wise sayings of President Daisaku Ikeda who is the author of the quote above.
Respecting and cherishing people’s lives and experiences has taught me an empathy that gives me the skill to paint portraits that capture the individual’s essential self. It is something more than character but I would never claim that I capture the soul. Capturing a soul must be something like pinning a butterfly.
To sum up I will quote President Daisaku Ikeda again: "It is the spirit of mutual respect and the willingness to learn from others that bonds hearts together. In the words of a wise person, when you bow respectfully to the mirror, the image in the mirror likewise bows to you."
Posted by Jen Kirby at 22:09 No comments:

Gypsy Portraits Changing Expectations Exhibition
Appleby is crowded with visitors to the Appleby Horse Fair, and horses of all shapes and sizes. If you drive this way be very careful. I heard today that a small child running from between caravans got run over, and has a broken leg. We don’t want any more injuries. Children will always get excited and not look where they are going.
My exhibition is set up and attracting positive attention from locals and visitors.
This is a visual post. Here are more photos of the portraits. 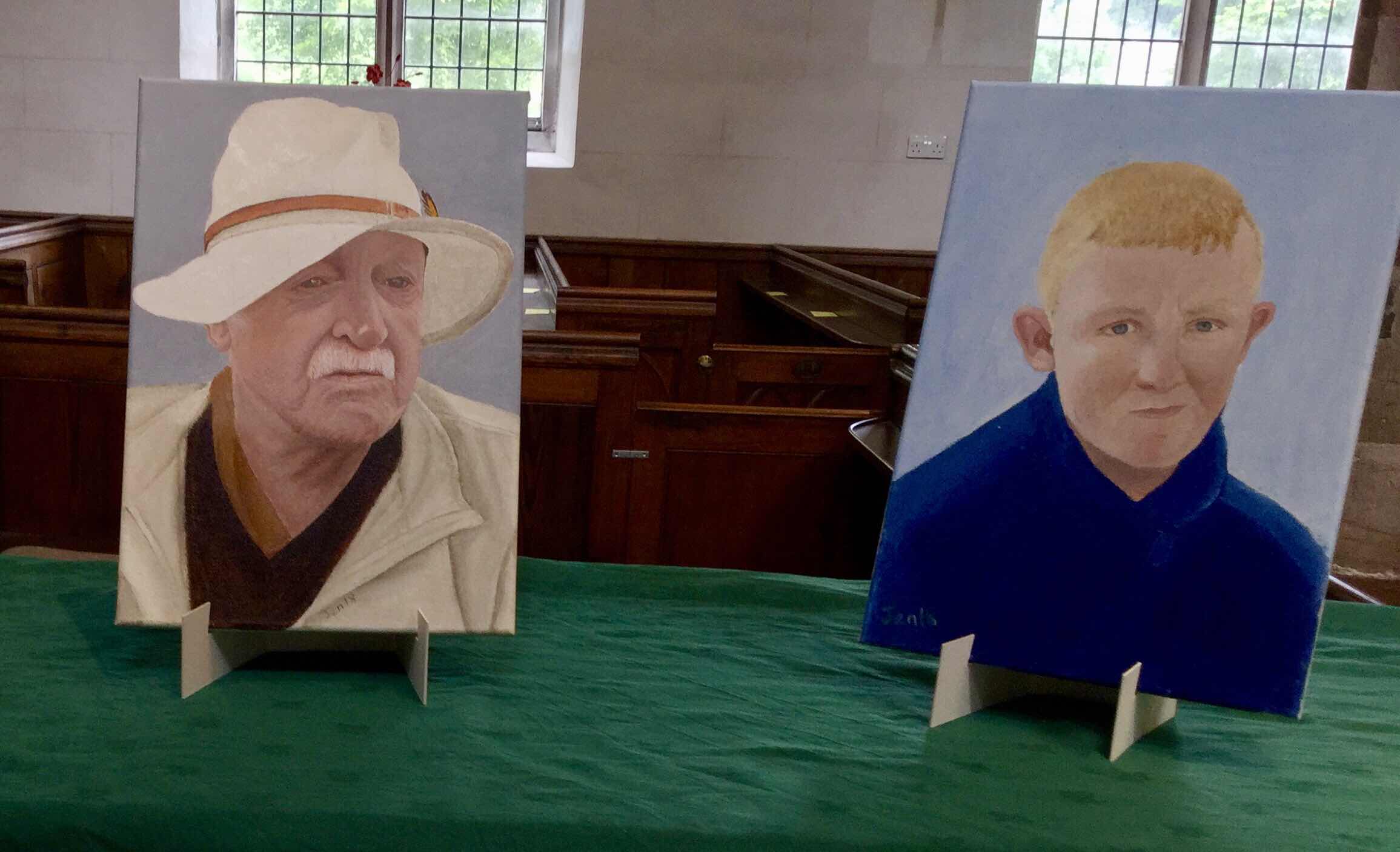 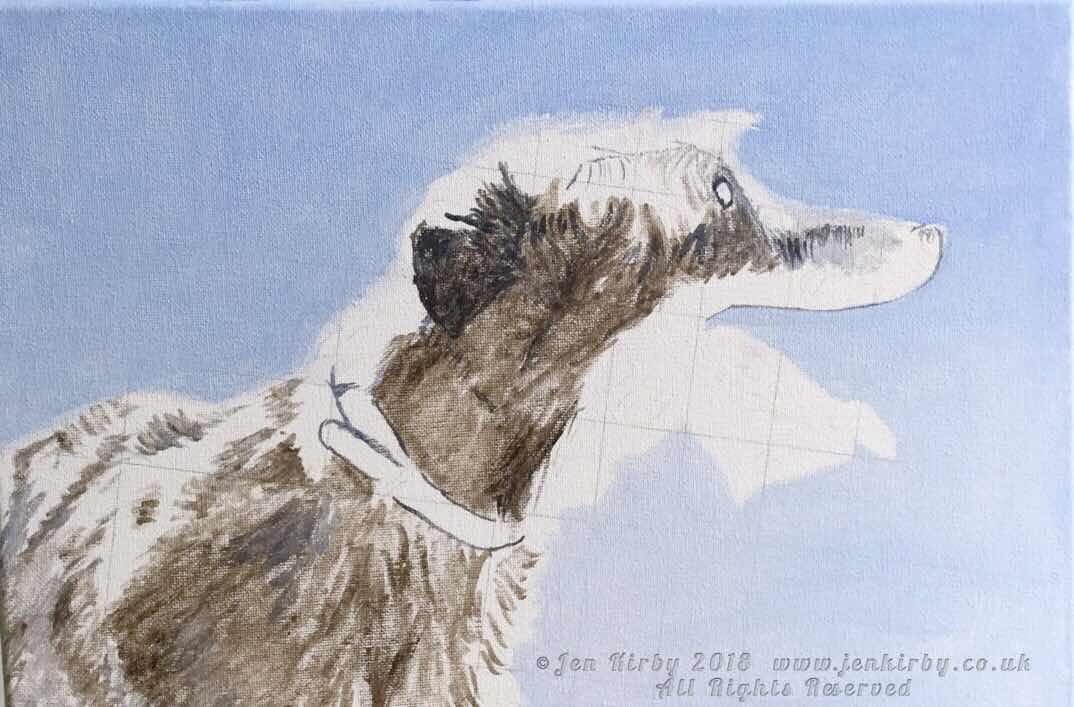 Boots
Boots is a beautiful Deerhound. I am painting him in water mixable oils on canvas using Payne’s Grey and white, warmed with a hint of sepia.
I am not sure about the shape of Boots’ eye. In my reference photo his eye is bleached out by reflected light. In fact at one time I was wondering if he had a visible eye at all. This is one of those times that I am very glad that I have dogs who often cooperate to help me work out canine anatomy. Bryn is a cross bred Wolfhound so I am going to ask her to hold her head in the right position.
This time next week my exhibition "Gypsy Portraits, Changing Expectations" will be on view at St Lawrence’s Church, Appleby-in-Westmorland during this year’s Appleby Horse Fair.
I am still busy finishing portraits. So I will get back to the easel now.